Most sustainable building in the world has link to Medford According to Joel Connelly in the Seattle PI, Seattle’s Bullitt Center was recently selected in an architectural contest as the world’s most sustainable building. The Bullitt Center is a newly built, five-story office building that makes extensive use of reclaimed local resources, non-toxic materials, rainwater collection and reuse, and high-efficiency systems, with solar energy offsetting its energy demands.  For the contest, World Architecture News reviewed 33 buildings completed in 2013 for their sustainability and potential for realistic impact on the environment. “The Bullitt Center was victorious over five other finalists. It was the only finalist chosen from the United States.”

The article described some of the features that helped the Bullitt Center win:

Architect Luke McKneally, a Medford resident since 2007, was the Project Manager for Solar Design Associates, the company that worked on the renewable energy aspects of the Bullitt Center. A new member of Medford Energy Committee, Luke has been working on renewable engineering since 2006 and has always been sustainability oriented. He has a spouse, and two young children, one of whom is in kindergarten at the Brooks School.

Luke was also a technical consultant to the Massachusetts Clean Energy Center for the Solarize Mass program, providing engineering assessments of the bids to ensure that the contractor chosen met all the technical qualifications.  (Medford was one of the communities that successfully completed the Solarize program.)

Following is an interview with Luke McKneally conducted in January 2014 by Medford Energy Committee member Susan Altman, following the announcement that the Bullitt Center had been chosen as the world’s most sustainable building.

What was your role on the Bullitt project?

I worked for Solar Design Associates, which has headquarters in Harvard, MA, and was the project manager on the energy engineering for the Bullitt Center. [SDA provides engineering and design services that creatively integrate renewable energy systems into buildings and utility infrastructure in New England, nationwide, and around the world.] SDA has a lot of experience in solar energy projects. SDA worked with the primary project developer as well as the other architects, teams, and interested parties to make sure the renewables worked with the rest of the building.

My role as project manager included managing the SDA engineering resources, working with the project architect and construction team, and responding to client questions. 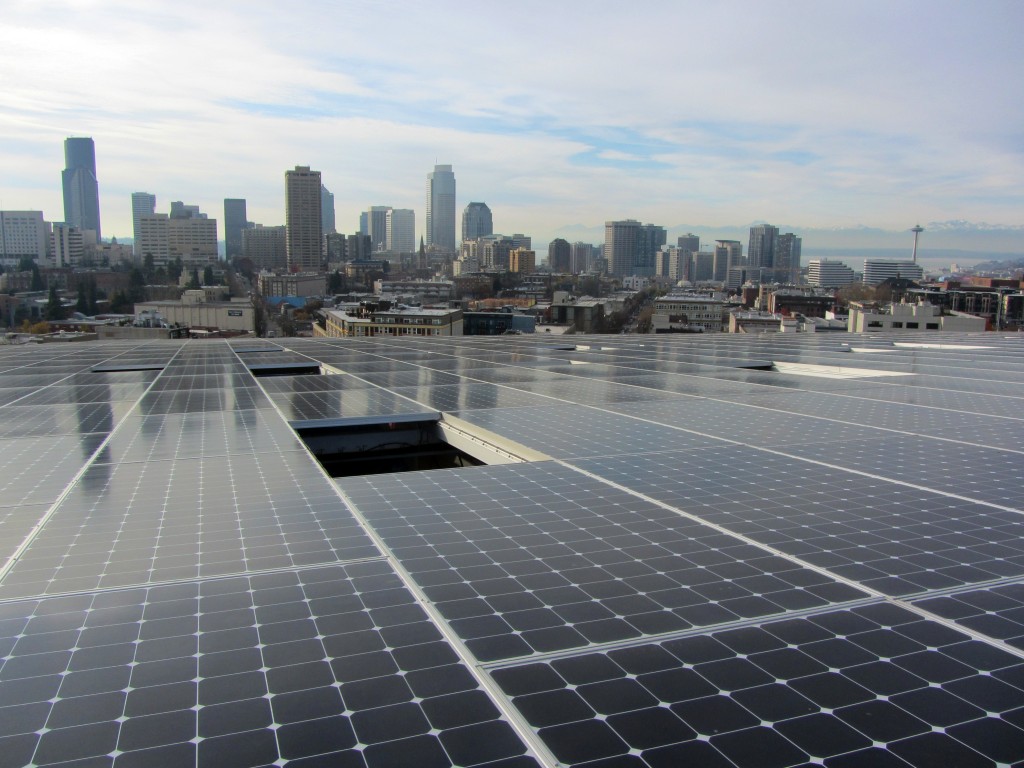 Now that the Bullitt Center is up and running, is it meeting expectations?

After a year, Bullitt has been well ahead of the net energy balance [this is very good], and the solar array is performing above expectations too.

Is there an aspect of the project that stands out for you as the absolute best?

The Bullitt project is on a small urban site and trying to fit a project with a typically large amount of energy demand into a very strict set of energy and environmental criteria as established by the Living Building Challenge.[2] This takes the urban sustainability challenge to the fullest and so far the building is meeting its goals.  It’s very hard to do this. I credit the owner, Dennis Hayes,[3] and the Bullitt Foundation for pushing the boundaries of what’s possible while being realistic about the strict limitations imposed by the site. As the Bullitt Foundation CEO, he has pushed to develop the “greenest” office building in the world, and it appears that he has succeeded. Maybe because of this project, the next generation of buildings like this will be easier to build.

What relevance does the Bullitt Center project have for Medford?

Although the Bullitt project may be beyond the scope of what a small city or town can do directly, the constraints are part of what allows it to be so exceptional.  Seattle has planned for this type of development and has a vision for it. Like Seattle, Medford could further encourage private development that aims for this kind of standard. Medford would need to build a vision for sustainable excellence in commercial and institutional development and become a destination for this type of growth.

What vision do you personally have for Medford in being a leader in energy conservation and efficiency, esp in terms of non-municipal buildings?

Medford is already on a great track for renewable energy. I’m proud to be a Medford resident because of it. Our community has great potential because of its location and because it has an opportunity to still define how it will grow. There’s no better way to do that than to keep growth in line with a cleaner, greener future.

[1] You can watch a 5-minute video about the building of the Bullitt Center, here. http://www.solardesign.com/SDA_Today/living-proof-building-the-bullitt-center/

[2] The Living Building Challenge™ is a green building certification program that defines the most advanced measure of sustainability in the built environment possible today and acts to diminish the gap between current limits and ideal solutions. Projects that achieve this level of performance can claim to be the ‘greenest’ anywhere, and will serve as role models for others that follow.